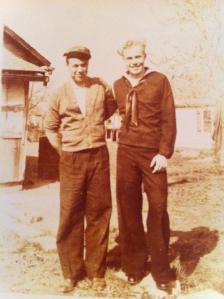 It seems like the most fitting place to get things started is at the beginning. Or, at least my beginning. That would be my dad. His name was Charlie. His brother Kenny called him “Chawley” (say it slow and drag it out!).  His other brother Clyde called him, “Cholley.” We all called him, “Pop.” I will probably write a lot about Pop, but today I’m taking the easy way out and simply reproducing something that I wrote a long time ago. We just moved from an apartment into a condo and in the process I came across an old poem that I wrote Pop after we learned he had terminal cancer. It’s a lousy poem, just like ever yone I ever wrote, so don’t bother with critiquing it. It was just my way of honoring the life that I looked up to. So today, the Mr. Nasty in me will stay in check, but there is always tomorrow! The spacing is whacky, but I don’t have time right now to fix it, so live with it. Enjoy the poem.

He was born in Monroe County,

On the City’s near west side,

To a family that was so poor,

The roaches even cried.

Their home was not a Model,

For the latest Indy Show,

That was not the life,

The floor was made of Mother Earth,

He slept upon a pallet,

He lay all night with one eye shut,

Hammering rats with a mallet.

He gave up school and social life,

He hauled pop bottles in his cart,

When he was just a babe.

He had a nice new Model A,

Or was it a Model T?

But his mother sold it,

While he was out to sea.

And never has been sorry once,

He wants you all to know.

They started with a local store,

And slaved away each day,

They scoffed away a franchise,

“Who ever heard of IGA?”

They operated hand to mouth,

And half of Monroe County,

Still owes at least a dime.

They moved across the street,

Without a helping hand,

And built a lovely eatery,

They called a “Geedunk” stand.

But they grew weary after time,

Of grease and coney sauce,

And said, “Let’s split from this place,

While we can count our loss.”

So Pop switched to punching clocks,

For the bunch who never quits,

Through snow and sleet and hail.

Somehow, now, while on this job,

His behavior was so ghastly,

That they bowed before his feet,

Somewhere along the winding way,

So Pop the “calculator,”

So who won out in your own case,

Is up to you to ponder,

But I know in my regard,

They raised us all as best they could,

“Never stop while on a trip,

Until the kids beg to pee!”

But in the course of time we knew,

That we would pay them back,

By having enough crisis,

To cause a heart attack.

We made life such a challenge,

You were nearly a nut case,

So you traded MR Nasty,

And put Jesus in his place.

So thus you’ve lived in peace these years,

And offering us wisdom,

For every rule we bent.

Somewhere down along the road,

In your words we did invest,

And we have all come to conclude,

That Pop, you are the best!

Now you know that your own parents,

Left this world much as they came in,

But when you reflect upon your life,

You see how blessed you have been.

For many stories have been told,

Of lives that became great,

Several years ago, while fighting the boredom of an Indiana Winter, I started writing a family newsletter. I began mailing it out to family members and for some unknown reason, they seemed to enjoy it. I have often been asked to bring the newsletter back to life, but up until now I have resisted. Finally I decided, “Why not?” Well, there are a lot of reasons “why not,” but against my better judgement, here we are!

The stories you are about to read on this blog will be based on the true lives of my family, both past and present. Since this is a worldwide media, I will do my best to be sensitive to the people I call friends and family. I imagine they will be the only ones actually reading any of this nonsense, but just in case some outsiders decide to tune in, I will keep everyone’s personal feelings in mind. 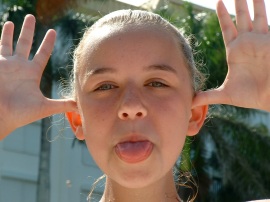 If you read something you don’t like, well, here is what my daughter Cailin has to say about it!

With that said, my family knows me. They know I have a sarcastic mouth. They know I’m a bit bent when it comes to poking fun. They know our father was nicknamed “Mr. Nasty” by his coworkers at the Bloomington Post Office because he could really cut you to the bone with his words…and they know the fruit didn’t fall too far from the tree!

So fasten your seatbelt, put on your armor, lighten up a little bit and let’s take a ride down memory lane. Welcome to “The Truth as I Choose to Remember it!”